Do Not Give Them That Power:

I know that I am not alone when I say this loud and proud, I cannot stand negative and toxic people.

Yeah, me neither, sis, PREACHHHHHHH!

Yes, sis, dive right on in!

Alright, let me drop some knowledge right quick. (Simpler terms: Okay, I am going to state some facts at a rapid rate.)

Before we get started, here are some very realistic examples of Toxic Trisha’s:

You say that you want to go away for vacation, preferably in the next three months.

A Toxic Trisha would respond, “seems nice, but you do not have the money”

Although, the Toxic Trisha may act as if they did not mean to say it like that, they are really being a douche by saying something like that. They said it that way on PURPOSE!

Now you are thinking…. what do you mean I do not have the money, sis? Do you know my financial situation? Are you my bank account? Do you have access to my funds? If I say that I want to go on a vacation, clearly I have the money.

It clearly pissed you off. Now you are feeding into their negativity, just like they wanted you to.

Toxic Trisha’s love to assume things, as if they know everything, when in reality they are actually NEVER around or present. Therefore, they tend to just blurt things out without knowing the real facts, PURPOSELY knowing that what they just blurted out will enrage you.

Think about it… They do it on purpose, trying to get a rise out of you, so that you can join them in their misery.

You enrolled in college, after a five year break from graduating high school. You are very proud that you have made that decision, so you decide to share it with everyone.

A Toxic Trisha would say something to bash your accomplishment. They would say “Congratulations on enrolling back in school, but you should have enrolled in college after graduating high school.”

Now you’re thinking… Bruh, are you serious? Should I just slap you? Is that what you want? You want a slap? You could not say congratulations without trying to downplay my accomplishment? Yes, I know what you need… it’s called a slap!

Toxic Trisha’s can NEVER give out genuine compliments without ruining it by stating something negative afterwards. They will give you a sweet compliment then say something completely unnecessary afterwards.

I’m convinced that they never heard the saying…

“If you cannot say something nice, do not say anything at all.”

Now that you guys understand what classifies a person as a Toxic Trisha, I’m going to give you guys some advice on how you can handle situations like this.

Here are the Top 3 Ways to Handle Negative & Toxic People:

This is my favorite… I literally have a masters degree in ignoring folks. (I wish they did give out real degrees in ignoring people, honey if they did… hahahaha.)

If you post something or say something and a Toxic Trisha wants to invade your positive frame of mind, ignore them.

No matter how bad you want to respond or feed into their negative and toxic ways, DO NOT.

Do not give them that power.

Simply ignore them and make them drown in their negativity all by their self.

Have you ever heard the saying,

That quote is so true.

Toxic Trisha’s enjoy making everyone feel as miserable as they feel. Negativity is contagious, that is a fact. Therefore, by only reacting to their negative remarks, you will only be giving in to their dark and tainted miserable ways.

Ignore them. Let them say whatever they want.

Respond to the Positive Only –

If they tell you something that is very negative and only has a bit of positive, just respond to the positive. Do not entertain the negative part.

You post a picture of you and your child, on the train going home.

Toxic Trisha says “You two look cute, but trains are filled with germs, that’s why I don’t take the train.”

As bad as you want to respond to that negative part about trains, you should just respond to the positive part.

Say “ Thank you.” Then keep it moving.

Everyone can already tell how much of a miserable person they are just by hearing or seeing their unnecessary remarks.

If you can not ignore the negative things that they say, then keep it cute with them. Do not respond to their hate with more hate. Entertain it with a bit of positive sarcasm.

Respond with a non negative, yet direct and humorous response.

Address them in a manner that shows that you are not about to become a victim of their negative and toxic remarks, however, you will read them (also known as verbally destroying them to smithereens).

Imagine you posted a picture of your most recent hair do…

A Toxic Trisha comes along and comments on your photo “Oh, I don’t think that hairstyle is for me, it’s cute on you though.”

I know the first thing that will come to your mind is… “Bihhhhhhh, F your opinion.” However, do not feed into it, that is the reaction that they are hoping for. That’s why you have to keep it cute, sis. Do not give them that power.

What you should say is:

“That’s good that you know it beforehand, thanks for the compliment.”

“Yes, I agree, I’m glad you know that it is not for you, it will not be cute on you if you had it. However, that’s why it’s for me and looks cute on me.”

(Tip: This response will make their blood boil. Be prepared for a slight back and forth. However, continue keeping it cute… It will make them more mad. Which is funny because why would you say a dumb comment like that if you do not want a debate? )

If they continue with their negativity, let them talk to their self like the true negative nutcase that they are. They would be so busy attempting to make “a point”, however, they look like a hater! (Nah, scratch that! Sis, they are a hater!)

Toxic Trisha’s often say something positive then add on some type of negative opinion. Such as what they do and do not like, as if you give a Fudge….

Like sis, nobody asked for your opinion of something, why do you not understand that?.

As bad as you want to entertain their misery and their hate, just don’t. It is not worth it, especially if you are doing big things.

If you love this post, you’d love my next one. Stop what you’re doing and subscribe today! 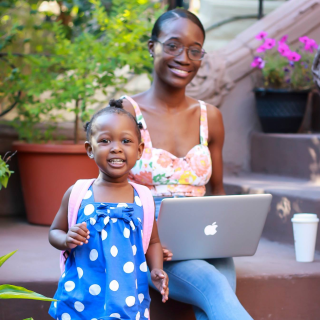